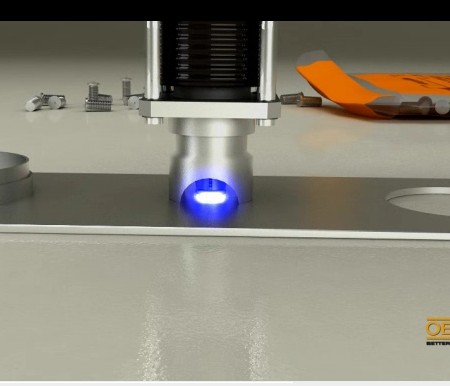 There are two ways to weld shear stud to base metal:

One is traditional electric arc stud welding, the stud is welded to the base plate using a ceramic ferrule to hold the molten metal in place until the bind is formed.

The other is a process variant, gas shielding arc stud welding, uses a shielding gas instead of a ferrule.

Most guys don’t know what exactly happens between the stud and base metal depends on the stud welding process. One article in THE FABRICATOR SEPTEMBER 2009 named “Small studs, big impact–A change in stud welding material saves power plant millions” by CHRIS HSU, TERRY STERLING, DOUG PHILLIPS describe it in details. Please see parts of the article as follows:

“This produces a dense weld as strong as the fastener and base plate. The best bond forms when the base plate is heavy enough to support the full strength of the welded fastener, though the process can be used for lighter-gauge applications as well. Welding currents are from 200 to 2,400 amps, and weld cycles are from 0.1 to 1.5 seconds, depending on the diameter of the fastener and the material being joined. It uses a specialized power source that in some respects is similar to the DC power sources used for shielded metal arc (stick) welding.

Capacitor discharge (CD) stud welding, however, uses an electrostatic storage system as a power source—in essence, a bank of batteries. Studs are engineered with a small projection, or tip, with high electrical resistance. The burst of electricity vaporizes the tip, which creates molten metal both on the base material and the stud. The spring in the gun then pushes the stud down into that molten metal, which solidifies quickly. This all takes place in 6 to 10 milliseconds. The process limits the heat generation and has a low penetration level, so that studs can be welded to extremely thin and coated material. It also uses no ferrule or flux. The weld quality, though, does depend on the geometric consistency of the stud’s tip. If the tip dimension varies, so does weld quality. If the tip is too small, the energy liquefies it too quickly; if it is too large, the tip may not totally liquefy for complete fusion.

Drawn-arc capacitor discharge stud welding, however, controls the time of current flow independent from the stud geometry. It uses the same principle of storing energy in capacitors, but in this process the stud doesn’t require a tip. Instead, the weld is created by pulling the stud off the workpiece and drawing an arc between the stud and the plate. Immediately after, a spring plunges the stud down into the molten material to create the weld. Unlike conventional CD stud welding, its drawn-arc variant is a controlled process. The operator adjusts the settings on the welding power source to control the stud’s drawing action as well as the energy put into the weld.

While drawn-arc CD stud welding can be controlled, it isn’t a closed-loop process. If some unforeseen variation in stud size occurs, the system can’t compensate on-the fly. Only the latest stud welding technology—inverter drawn-arc stud welding—can sense changes and compensate for them within a millisecond, to ensure the process uses the correct current and time for the stud actually being welded. Such inverters weld with up to 1,500 amps for 1 second and less, giving that burst of energy required for fusing the stud to the base plate. (A drawn-arc variant called short-cycle stud welding is optimized for automated stud feeding and high-productivity environments.)

CD stud welding, though older, still has its place in the market. The process leaves no backside marking and is particularly suited for thin-gauge work that requires cosmetically important finishes. Most other applications, however, have transitioned to an inverter stud welding process.”

If you want to know more information, please contact us: [email protected]